This is a particulate theater of architectural figures. Its deconstructive logic is found in functions and components commonly found, or considered to be, the basis of a theatrical space. Lights, sound, curtains, props, etc., all recognized as components of a theatrical experience, are no longer a diffuse, integrated system, but are objects with character. With a scatter of platonics as the basis of form and planimetric composition, these components of theater and phenomenal elements of light and sound question the relationship between theater and actor/character.
The figures scale is not of a building, nor is it a tool. Their scale lies outside of the everyday encounter.
Figures are discrete and are activated by architectural conditions that enable motion.
The distribution of figures creates a theatrical field
The person or the body’s role in this performance is integral but is in complete service to the performance.
The relationship between body and the theatrical component is not reciprocal.
The bodies that facilitate the performance surrender their subjectivity to the actors, the characterful objects.
The people who assist the performance are specific and unique to each performance.
There is a distinction between the audience and the cohort of assistants.
The participation of the audience is not explicit or necessarily required.
The stage is traditionally an open matrix that accommodates any number of compositions. A stage’s expanse accommodates both density and movement. With the ground as the stage, density is found in the result of the scatter. Movement is found both in the intrinsic motion of a given platonic aided by tracks and artificial ground condition that give agency to an otherwise static object. The ground, or the stage, is no longer an open matrix, it prescribes direction and gesture.
On the evening of June 30th, these three, 15 minutes, performances occur in sequence, from North to South.

Performance 1:
The audience enters from the north through a series of framed trellises that diverge from the established path. Approaching the first theatrical space, you encounter a folly garden of shapes, strewn on the landscape, without apparent logic. The audience gathers in lobby. The lobby has 50 wheels and sits on a track and a canvas roof that drapes from each frame. When the lobby is full, it begins to role on its track towards the sunken, circular threshold through the wall. The audience slowly walks under the lobby and through the gate. As the first members of the audience pass through the threshold, the ticketing booth rolls on casters set on straight tracks similar to those that belong to the lobby. A small, metal shape tinkles down the tube. Each audience member takes one. Some pocket it, some put in their bags, some fiddle with it in their hands. The audience moved further into the arena, and the curtains of the covered standing area open as the first audience members approach. They gather under the canopy. A cone the size of a person pivots around a circle, dropping a canvas on the ground as it goes. A translucent curtain hangs from rigging that projects from the wall. A larger, conic object circumambulates two walls of differing radii. Sound emanates from the cone, barely visible through the curtain, focused in the direction of its opening. It rolls through the wall, projecting sound towards the audience. A cart with two cylindrical wheels begins to move along the top of the wall. The cart pulls the curtain along a track  revealing the cone and an opening in the wall. A small pyramid sits on a radially scalloped plinth. It rolls over the scallops. Internal dust and dirt fall on the ground. The sound stops and a moment passes. Doors on a suspended box crank open, and a bright lights flips on, illuminating its surroundings. The frame of the suspended box, resting on overlapping tracks, one for each caster rotates and rolls along its path into the woods. 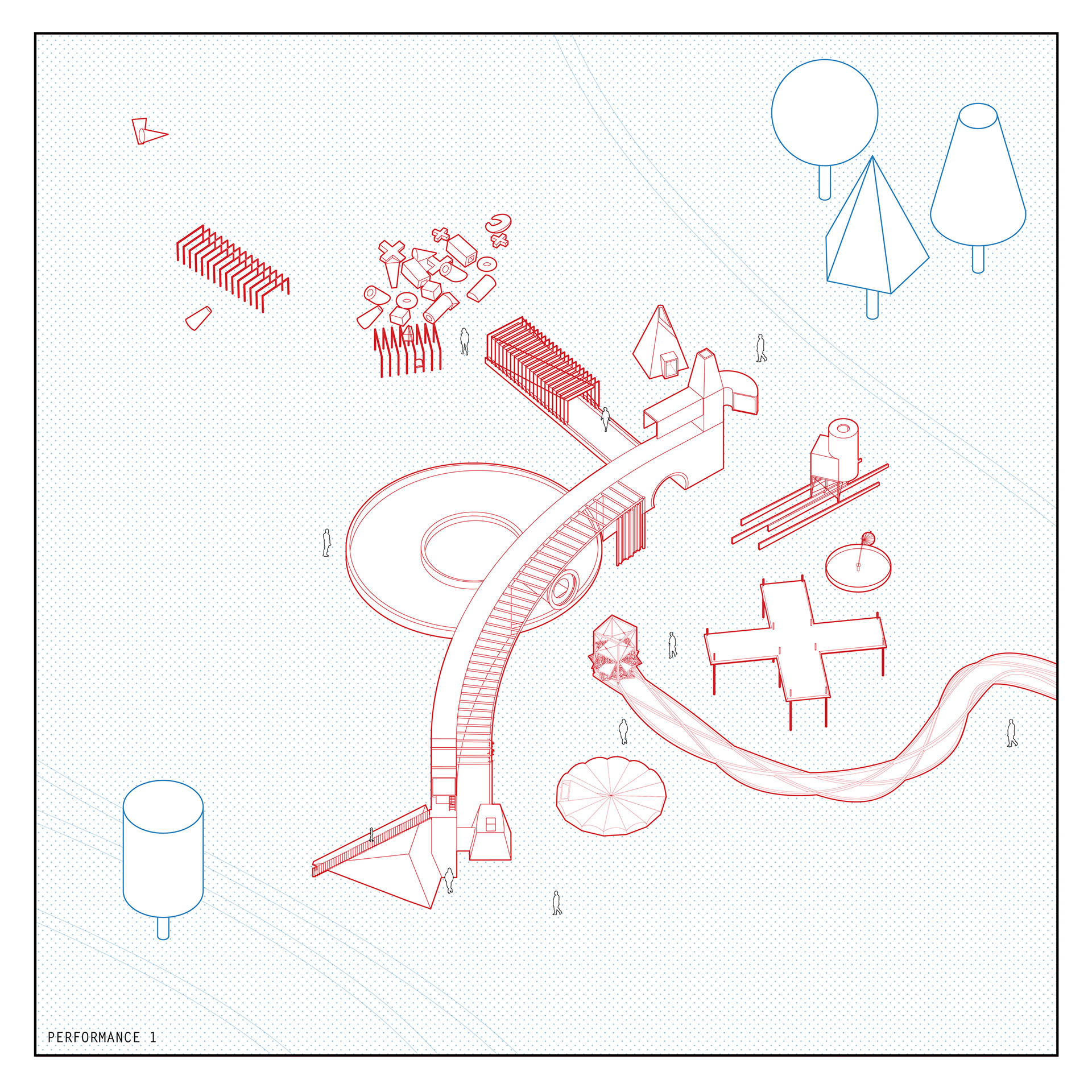 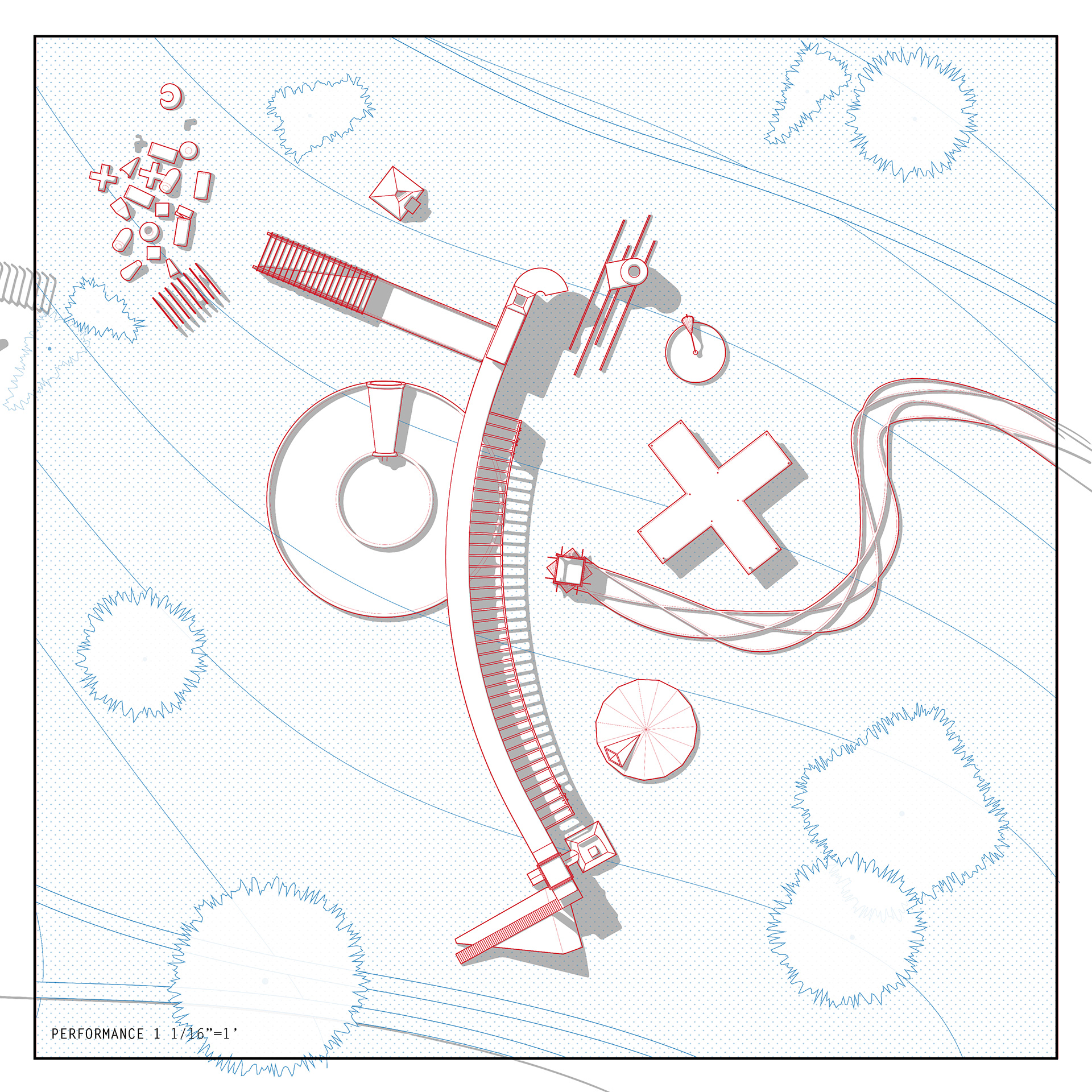 Performance 2:
The box of light, suspended in a frame on casters, having emerged from the woods, arrives at the top of the hill, where it rests and illuminates a court, contained by a circular wall. A hollow box rolls down a scalloped track. Sound reverberates around  the enclosure as a cone rolls back on forth from its point on the hill. The light box turns off. A figure on casters slides on thin elevated walls. Its face is screened. A vague, indiscernible motion can be seen internally. Boats on a gantry crane are winched up and over the wall. They stop above a pond below. Lights in cylinders that rest on top of the wall illuminate. They roll along the perimeter of the wall illuminating the center of of the court. As they roll, the boats are lowered into the water and detached from their winches. A figure in the boats operates a punting oar at the rear towards a stream of water that leads to the lake. The boats fade out of sight. A sphere at the top of the hill begins to roll down a set of tracks towards the pond. 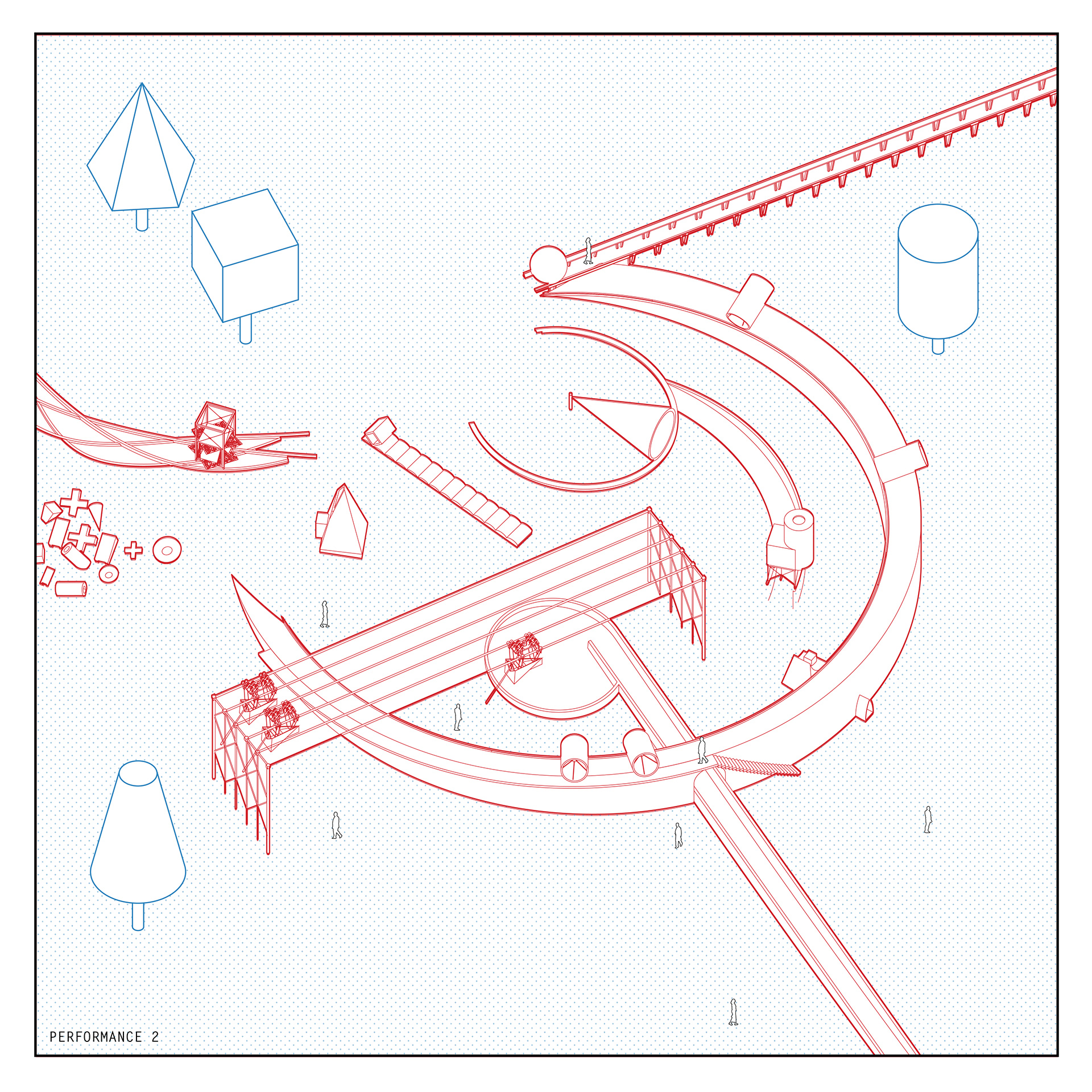 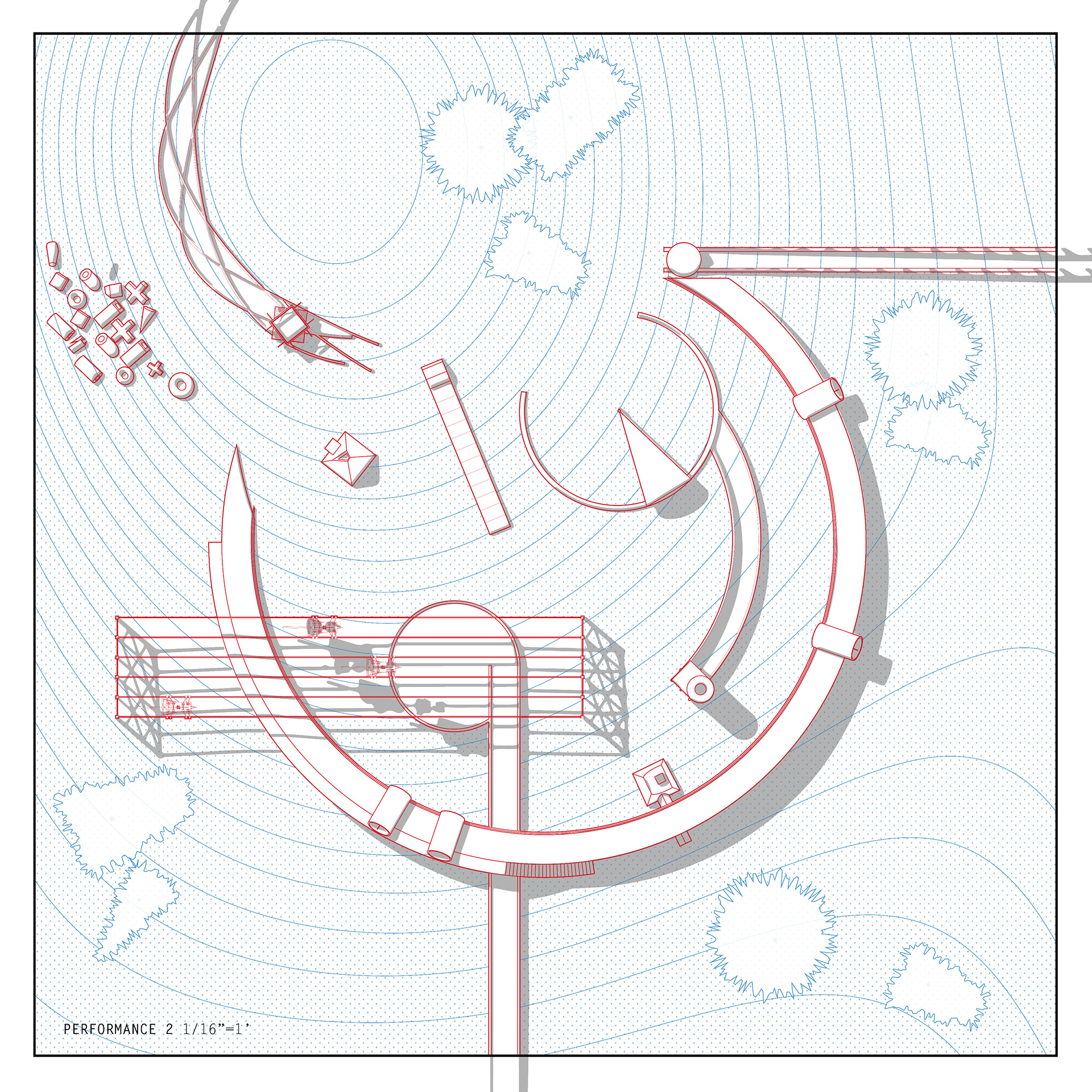 Performance 3:
The sphere crashes into the water. Water washes against the floating platforms that extend into the pond. A figure slowly rolls along its tracks that extends beyond the floating platform. Sounds projects from the figure with a screened face as it moves. The sound continues when it reaches the end of the tracks. Boats pulling figures through the water enter the platform enclosure on the water. They are pulled by ropes and once inside the water coop, the boat’s operators release the objects. A pyramid with its point in the water, pumps water into itself. Its body lowers closer and closer to the surface of the water but stops before it is submerged. A ridged conic body with thick rounded horns bobs and sways. One by one, lights at the end of the horns illuminate the water and reflect off the cones sharply stepped ridges. A caged taurus rattles. The boats file to a threshold in the wall. Their operators exit the boats, and pass through the wall to a room, lit dimly by a hint of light from the sky. 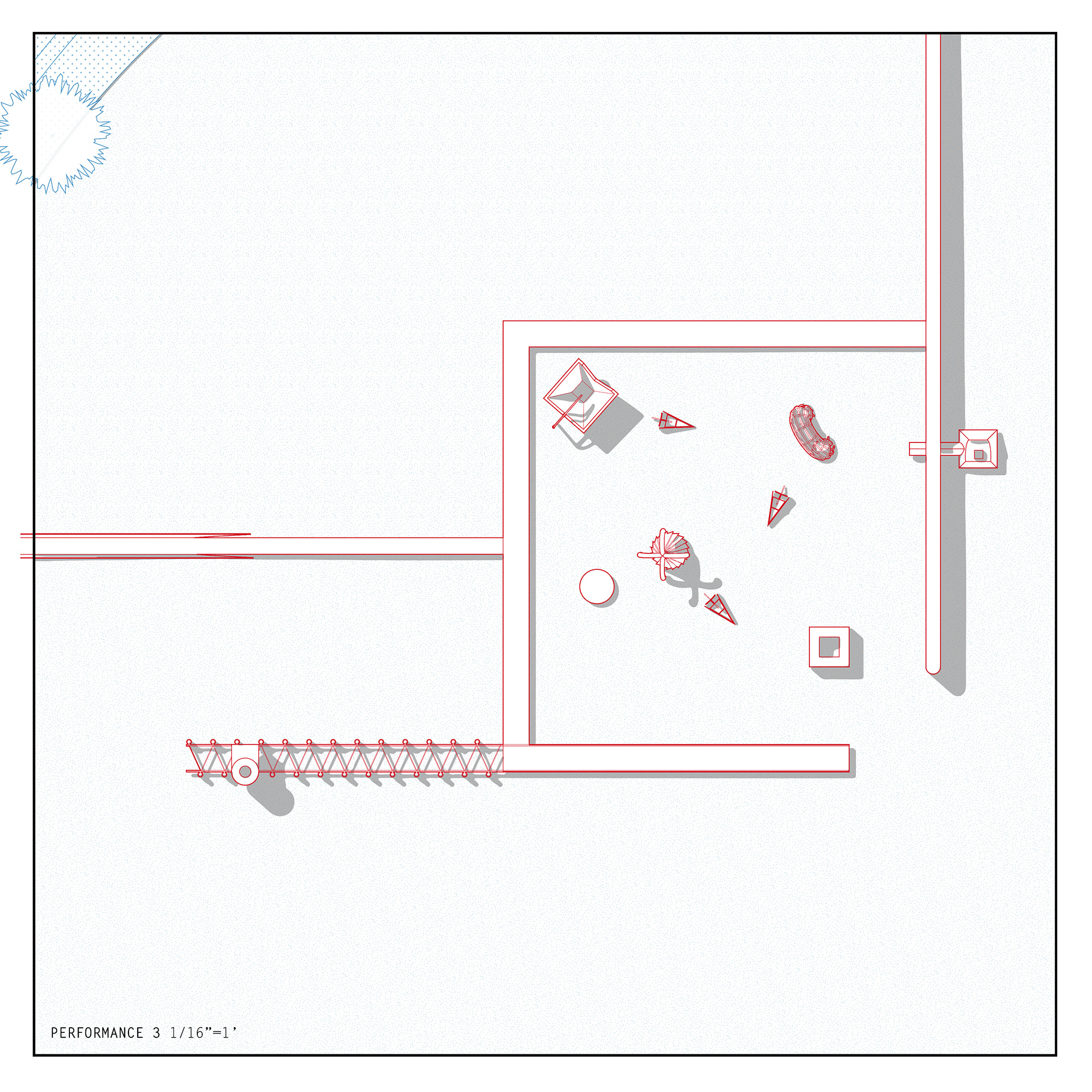 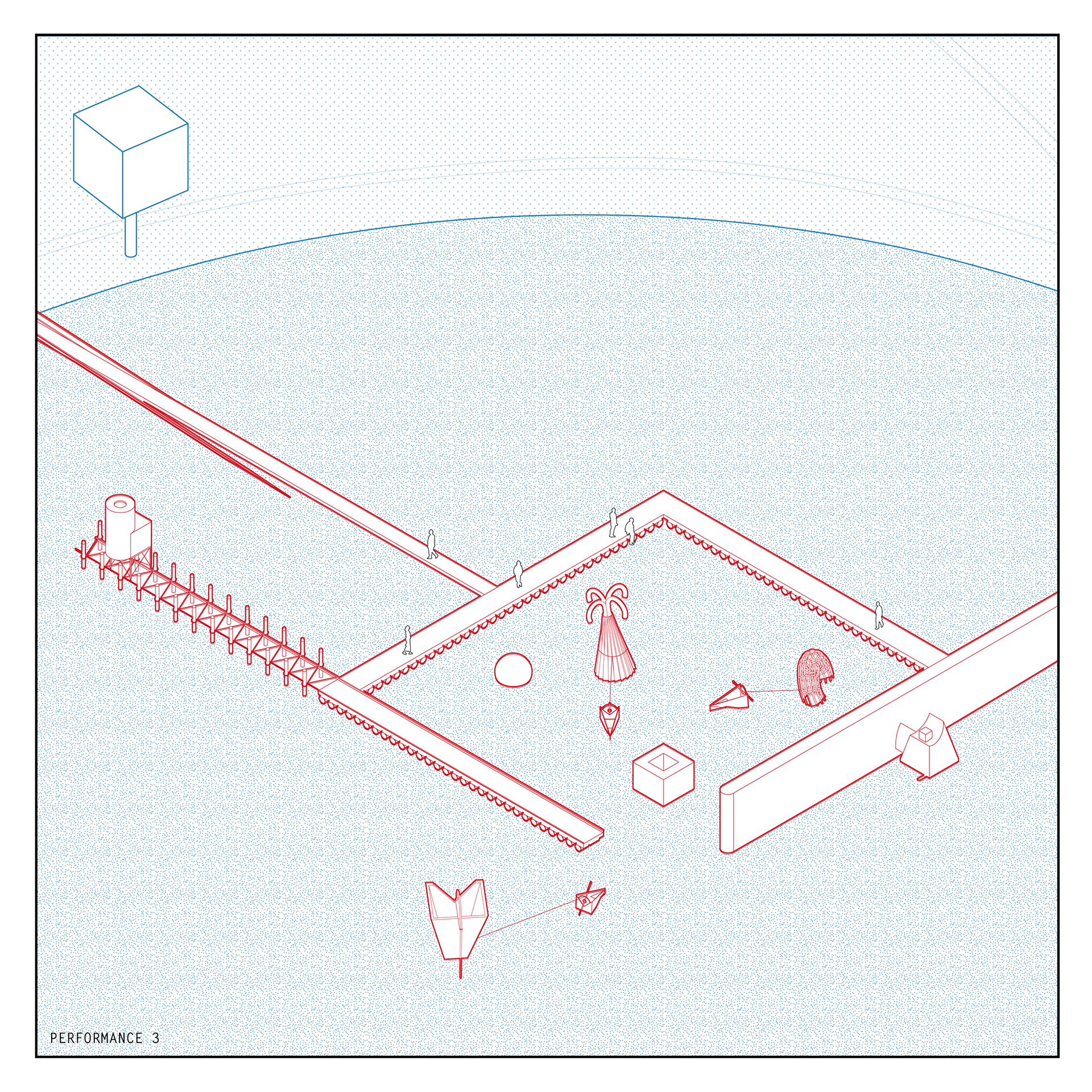 This project is one of composition, the architectural figure, and time.
I was initially interested in scatters and distribution sculpture like those of Barry La Ve, partnering with chance, to create compositions and geometric relationships. Hejduk’s Victim’s became an influential precedent, specifically his dynamic plan of Victims.  Notions of compositional randomness found in some of Noguchi's early work like the US Pavillion Expo in 1970 or the Cullen Sculpture Garden that use the ground in a specific compositional way and as a as a datum that describes relationships between objects. Both Hejduk and Noguchi guided the project to the question of the figurural architecture, as did work early projects from RUR and Alice Aycock. 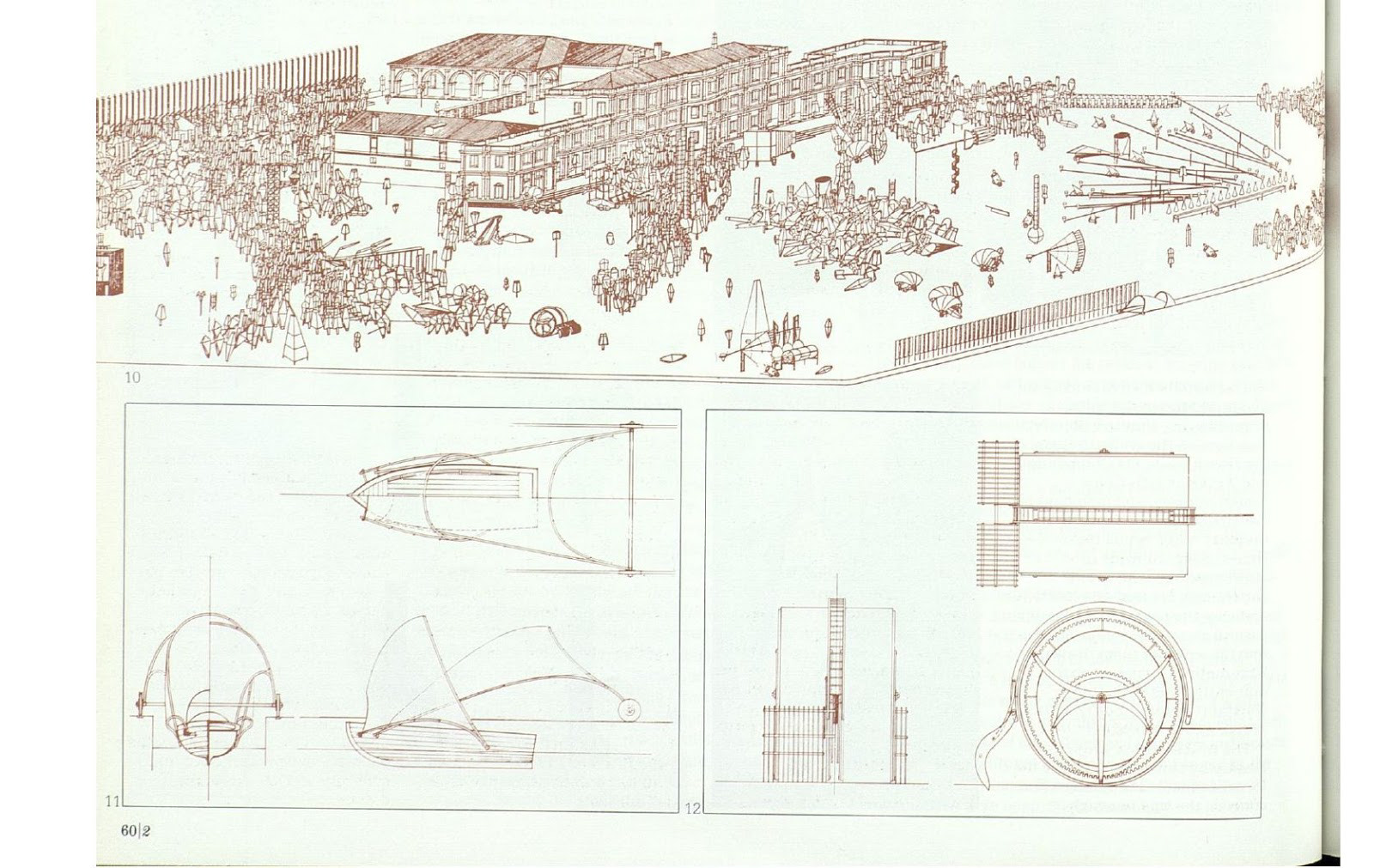 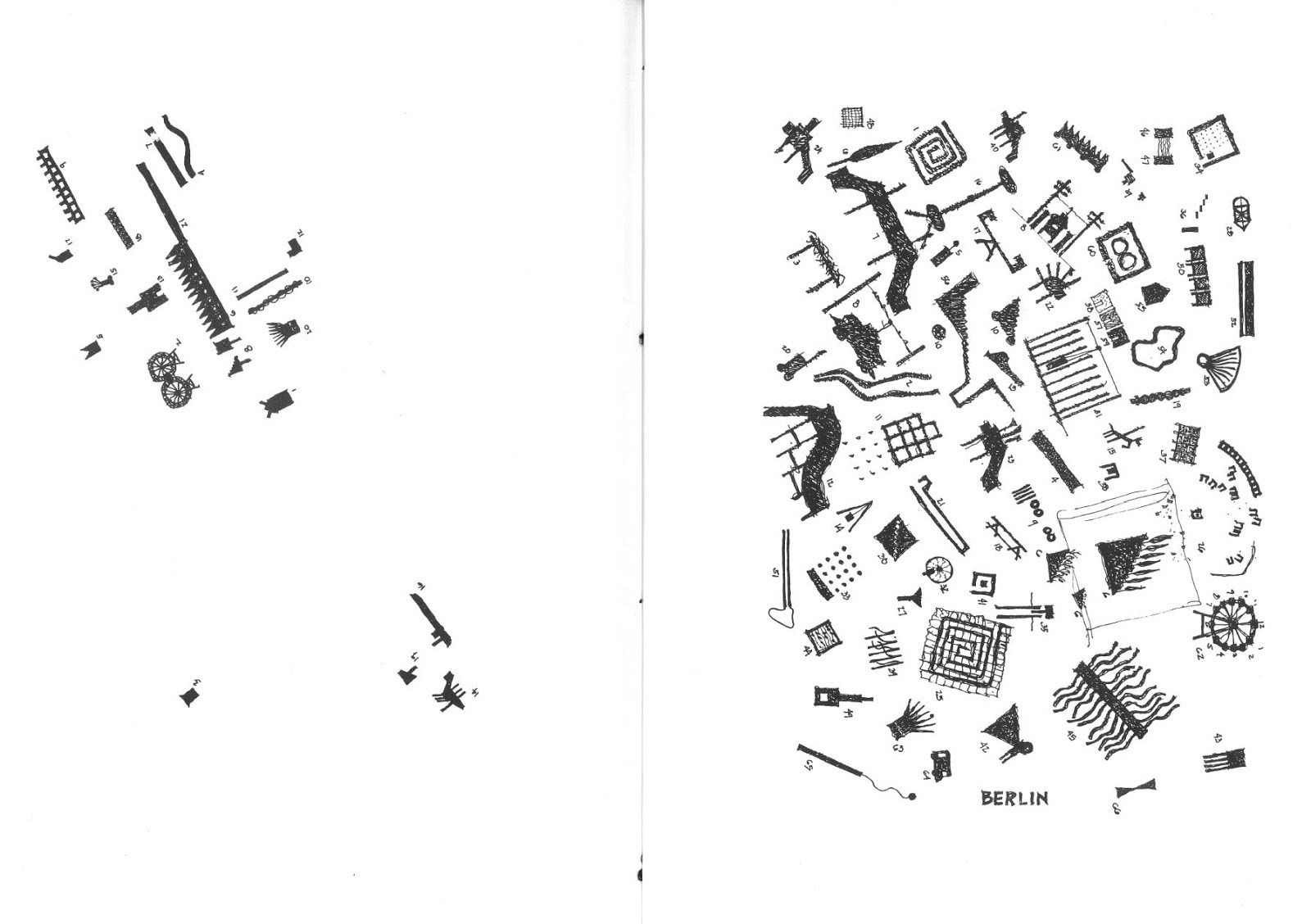 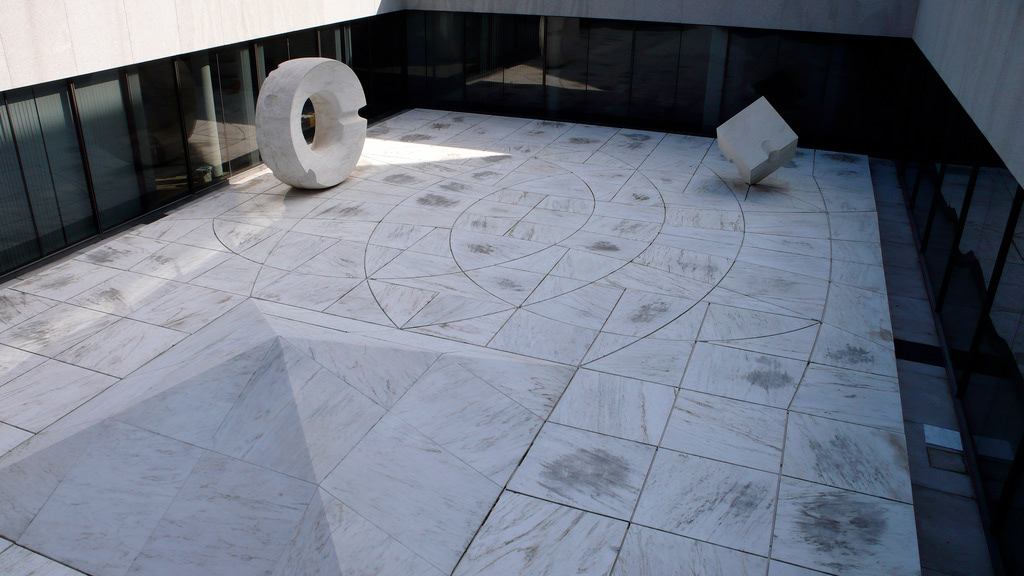 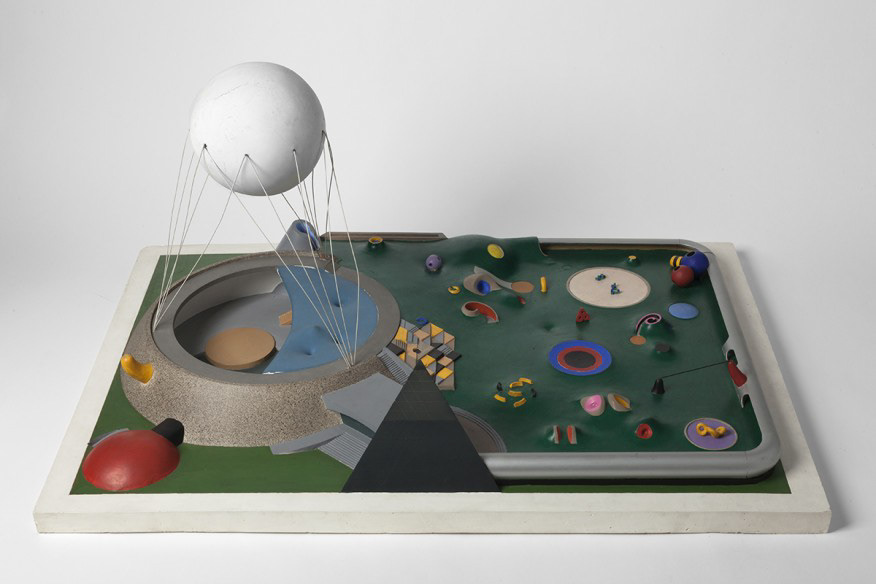 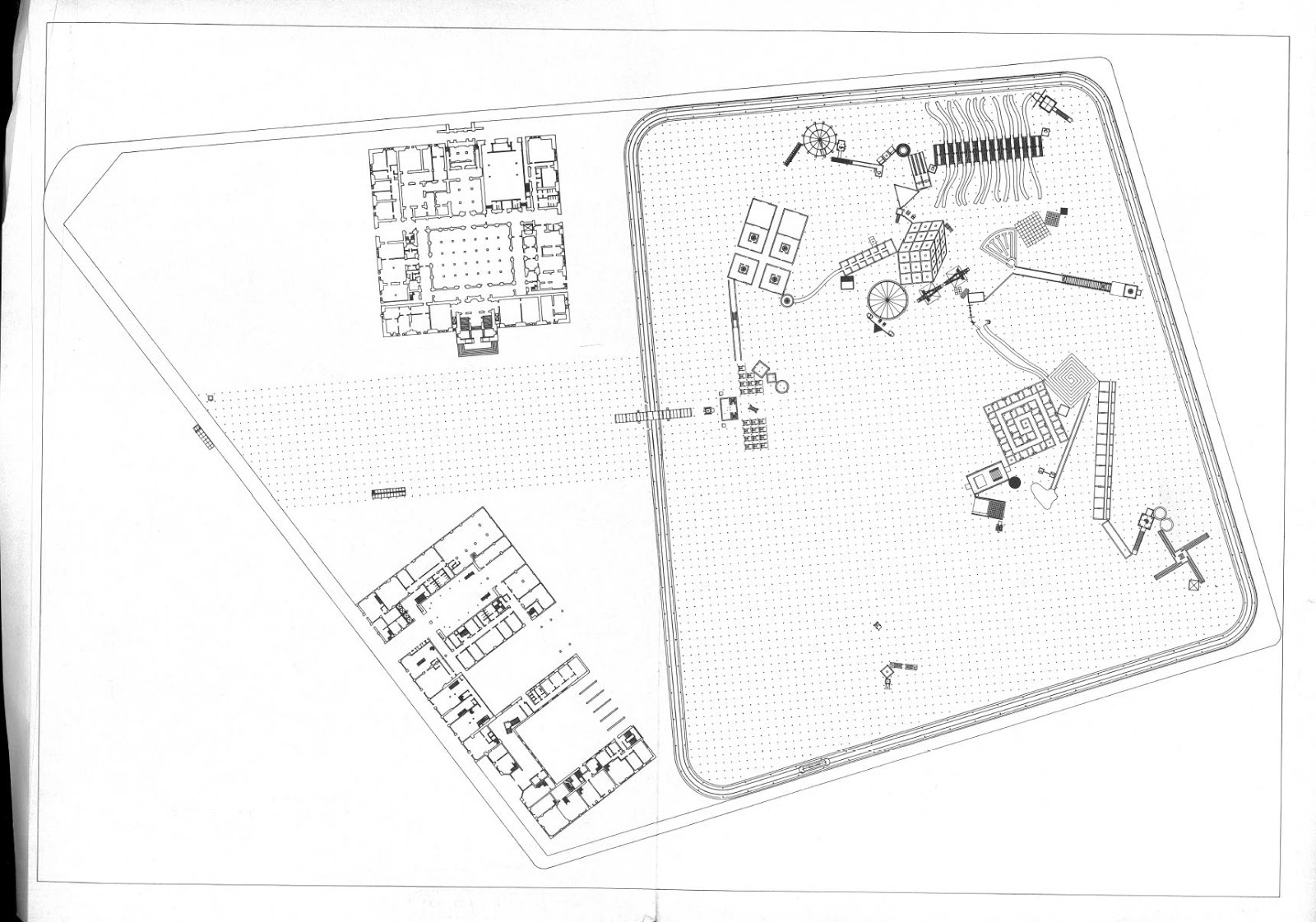 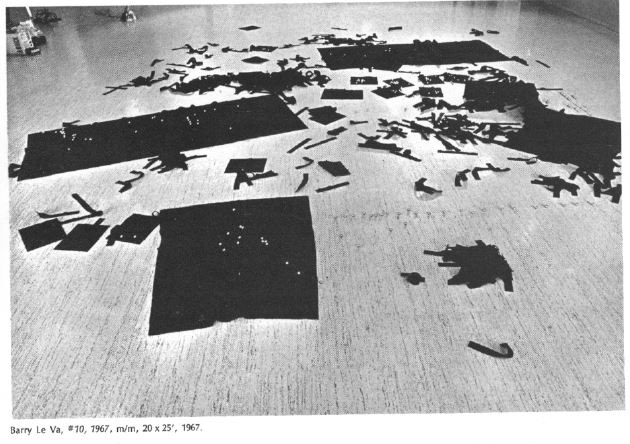 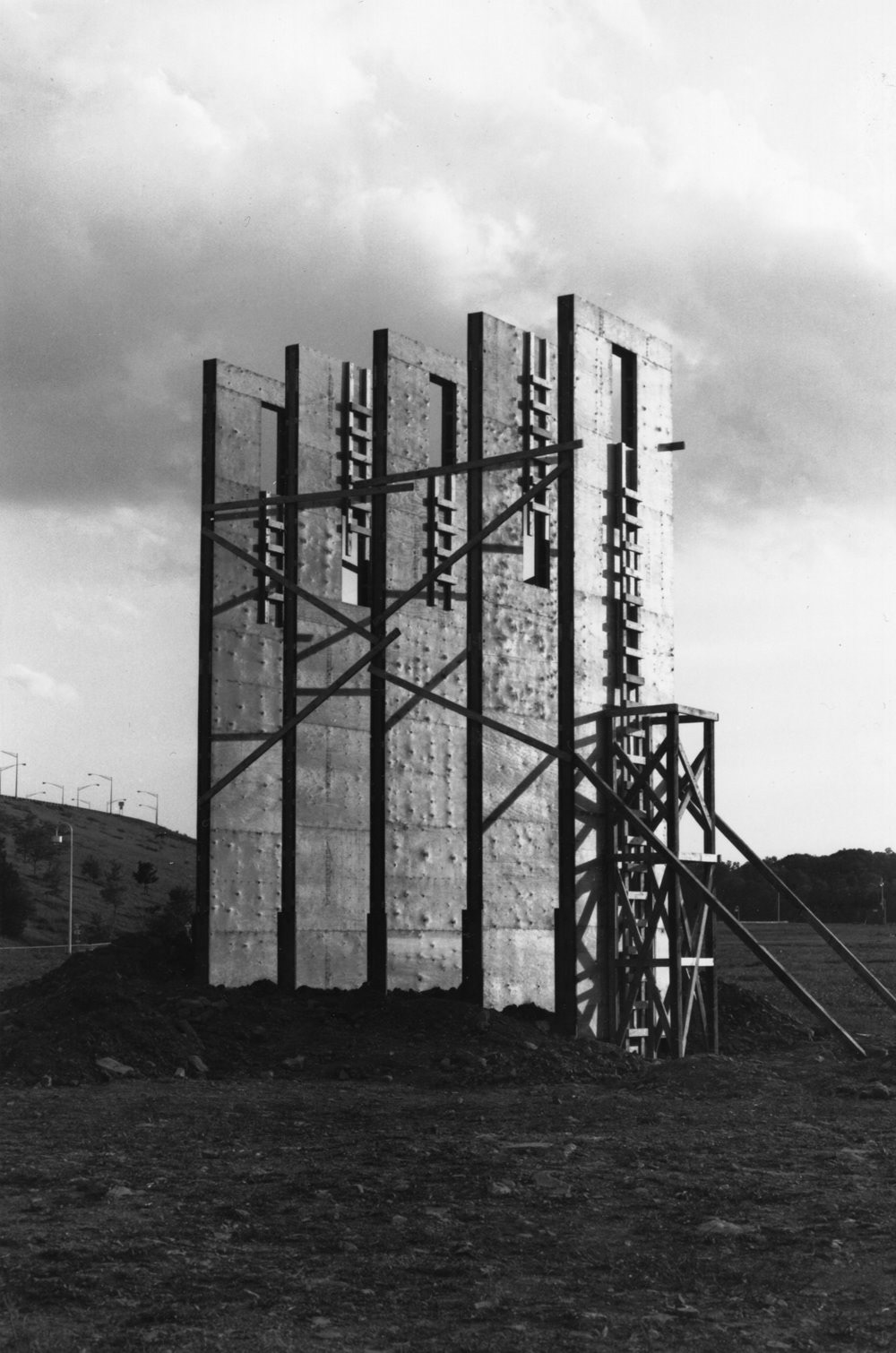